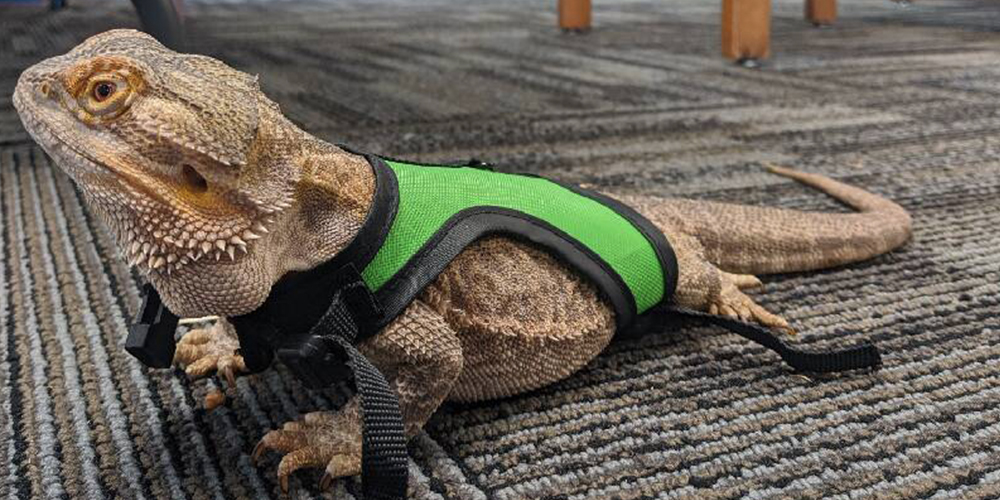 The Collegedale Public Library’s new resident always greets visitors with a smile. Rex (short for Tyrannosaurus Rex), the library’s new bearded dragon, is typically found basking under his heat lamp, his mouth hanging open in the signature grin-like gape bearded dragons use to release heat from their sweatless bodies.

“We wanted some sort of critter to be the library mascot,” said library Director Natalie Wright, adding that the library’s always had great success with kids programs involving animals.

Several years ago, the library’s beta fish, Mr. Bubbles — to whom the children became very attached — passed away. When staff member Gina Mullins told Wright that her daughter, who works at a vet clinic, was helping a family find a new home for their bearded dragon, it felt like fate, Wright said.

The Friends of the Collegedale Library nonprofit support group provided the funds to purchase Rex’s tank and heat lamps. The group also funds his care, including his favorite foods: greens and squash, said Wright.

Rex’s tank is often the first and last stop for kids who come to the library, and he’s a frequent guest at toddler storytime. When he’s not in his tank, Rex can often be found lounging on the shoulders of library staff members, who are just as thrilled as visitors about the library’s new addition.

Staffer Zoe Grimes has taken to the library’s Facebook page to share Rex’s adventures. In his “journal entries,” Rex marvels at the vastness of her new home and the strangeness of new discoveries such as odd miniature logs that make markings (crayons) and a metal shrub (wire maze toddler’s toy with wooden beads).

Whether real animals or humans in costume, library mascots are effective outreach tools known to boost library use, according to the Urban Libraries Council website.

“Rex is one of the best little library ambassadors that you could have,” said Wright. “We’ve got nothing but positive response.”

The library’s new mascot arrived just in time for Appreciate a Dragon Day, an annual holiday celebrated by libraries and children’s museums on Jan. 16 to honor dragons in books and film. The public was invited to come meet Rex, as well as craft paper dragons and peruse the library’s display of dragon-related books.

Pay Rex a visit at the Collegedale Public Library, 9318 Apison Pike, or follow his adventures on the library’s Facebook page.