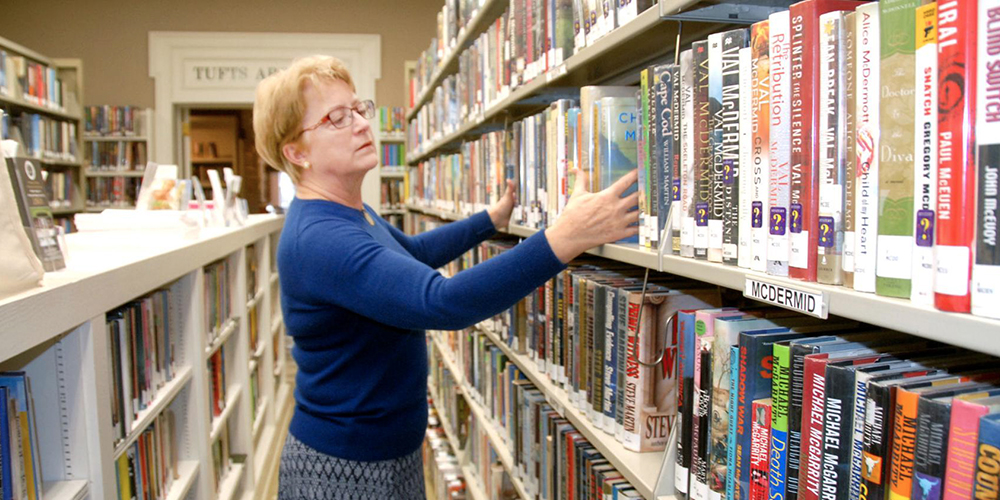 The village of Pinehurst is embarking on a library study at a time when many libraries across the country are undergoing something of a “resurgence.”

“It is a very exciting time for public libraries,” said Debbie Joy, with Library IQ, in a presentation to the Village Council last Tuesday. “It’s a time of innovation. It’s a time of transformation.”

The previous Village Council approved a $45,000 contract last September with the Maryland-based firm to conduct a professional assessment to find out what residents want in a library. Given Memorial Library, one of the few privately operated libraries in the state, is open to the public, not just Pinehurst residents.

Its board concluded that the library could not be sustained in the long term through private fundraising efforts, a private endowment and an annual $100,000 allocation from the village.

A yearlong study by a joint committee of library and village officials concluded that a professional assessment should be done to help determine the best way forward.

Interest among residents appears to be heightened, given the response by those wanting to be included on focus groups next month.

“The response has been unbelievable,” said Joy, whose firm has been working with the village for several months gathering data on the library and the community.

Assistant Village Manager Natalie Hawkins told the council that 100 applications had been received, double the number received for the Comprehensive Plan Think Tank a year ago.

Joy said they are often “lucky” to get 10 to 15 people to show up, “so this is really an amazing level of participation.”

She said they will be “engaging the community in a really robust way,” starting with an online survey that will be posted on the village’s Engage Pinehurst website, engage.vopnc.org/library, from Jan. 27-Feb. 28. Paper copies will be available at Village Hall, Given Memorial Library and the public input workshops.

In addition, surveys will be mailed to 5,000 village residents.

Public input workshops will be held Feb. 18 from 6-8 p.m. and Feb. 19 from 10 a.m. to noon. The four focus groups, called “community conversations,” will be held that same week.

“We want to understand what the residents really want and need in library services,” Joy told the council.

Council member Lydia Boesch said she was pleased to hear that public libraries are seeing a resurgence.

“How do we figure out what a library of the future is?” she asked Joy. “We don’t want to build something that will just suit us today, but one that will meet the needs of the future.”

Joy called such a design “a bit of a moving target.”

“We want to make sure spaces are flexible as technology emerges. … The other thing we think about is space for people, not just books and material.”

Boesch asked what is behind the resurgence and transformation of libraries — changing demographics or changing technology.

“They are transforming into more than just places to check out a book,” Joy said. “We want to be a community center, a neighborhood hub.”

She added that they are also noticing that many people want a quiet place to study and also for “hanging out and reading for pleasure.”

Boesch said a big concern for her is finding a solution that a majority of residents will support, given the strong feelings she has heard.

“I have heard people say adamantly we don’t need a library, it’s just a baby-sitting service,” she said. “We’ve got people on the other extreme who say, ‘Don’t take my library away from me.’

“As a council, how can we be assured what is brought back reflects all of that? We need to be assured that you are reflecting, generally, the thoughts, needs and wishes of the community, not this extreme or this extreme.”

Hawkins said the focus groups will include residents who do not currently use the library, so their voices will be heard.

“We are doing everything we can to cast the net as wide as possible,” she said.

Council member Kevin Drum said the village has “loud voices” on both sides of the library issue.

“I think we need the consultant to hear the quiet voices, the people that aren’t standing on either side of this,” he said. “We really need you to figure out a way to reach the quiet voices. I just think that is important.”

Village Manager Jeff Sanborn pointed out that recommendations and options will be developed from all of the public input. Those will then be included in a survey in April sent to randomly selected homes intended to represent the village’s demographics.

“Hopefully all of these things will ensure we get it right the first time,” he said. “But ultimately the statistically valid survey at the end will kind of be the proof in the pudding.”

Mayor John Strickland said how the questions are worded will be important, since that can often affect answers.

Hawkins said the questions will be formulated once some possible options are developed.

Strickland also stressed the need to make sure the focus groups reflected the village’s demographics in terms of age, gender, what neighborhood they live, those who use the library, and those who don’t.

Hawkins said the village saw a spike in applications after Christmas, which also saw some younger residents applying. She said 18 of the 25 that came in after the holiday were under age 55.

She said there will be four focus groups with a maximum of 15 members, so ultimately 60 people will be selected. She said they will make sure “they are as representative as possible” of the village as a whole.

Joy explained that the point of the public information sessions, which anyone can attend, is designed “to open folks’ minds to what is possible in modern library services.” Input from those will be used to develop questions for the focus groups.

Hawkins said residents can “dream really big” on what they would like to see or “dream what is more reasonable.”

“I am sure Library IQ will find the right balance for our community based on what she has heard,” Hawkins said.

“We need to make sure we capture that,” she said. “Then we will test that with the (random) survey.”

Council member Jane Hogeman questioned whether estimated construction costs as well as ongoing operational costs would be included with whatever options are recommended.

Hawkins added some “rough estimates” would be developed on capital and on-going costs once some possible options are determined.

“I do think it is important we have rough cost estimates so that the public can see when they are making their selections because they are the ones who are going to be paying for it,” Hogeman said. “It grounds them. … It is very easy to be transported by how wonderful something sounds, especially if you are not tethered somehow to reality.”

Drum injected, “If we are going to ask residents what they are going to use, we’ll probably have to ask them (if they) are they willing to pay for it. Wants and needs are two different things.”